PM Capital’s investment process has been successfully demonstrated over nearly 20 years across a range of market environments.

Our process is based on finding those relatively simple ideas that have been overlooked by the market; strong companies that are trading at levels that seem different to their intrinsic value.

Our team undertakes significant fundamental research and peer review to determine if a pricing anomaly does exist, the reason for it, the opportunity, and the catalyst required for change. We take a business person’s approach to investing by looking to understand:

• How a business works,

• Management’s philosophy in managing the business; and

• Those parts of the business that determine its intrinsic value.

We then ask ourselves “What would a rational business person pay for the business?”, the reason being that if a company’s intrinsic valuation is not recognised by the stock market, it will eventually be by a recognised businessperson through a corporate action such as a merger or takeover.

We then determine where else the anomaly may exist, determining a pattern that can be repeated across markets, across companies, even across industries.

These opportunities are relatively rare and it often takes several years for anomalous valuations to revert to a company’s intrinsic value and thus for the investment opportunity to be realised. This means we often hold positions for 5-10 years. 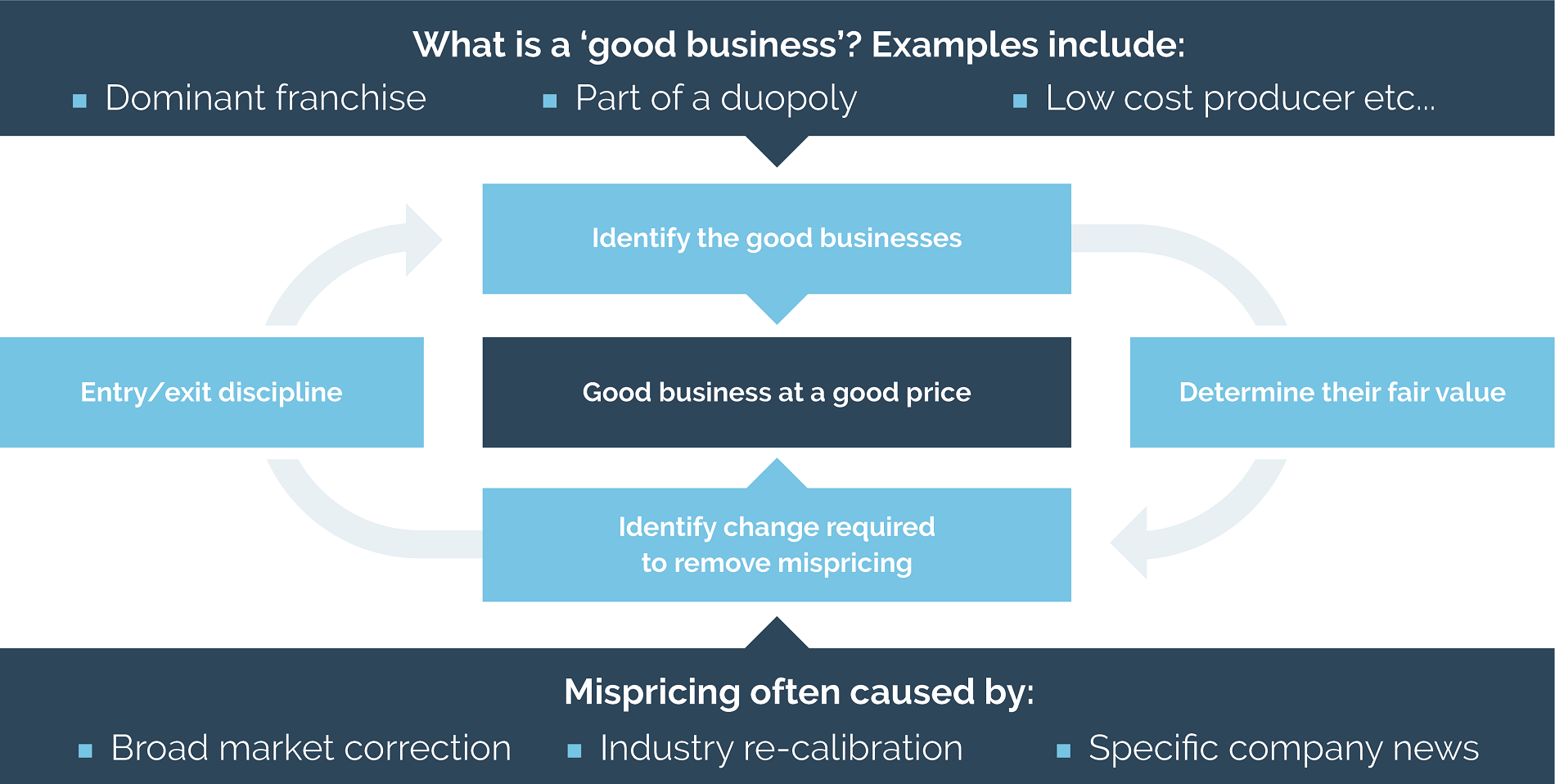 Our process is probably best explained by our Chief Investment Officer Paul Moore, using the example of our decade-long investments in global brewer Heineken and other brewers:

“In 2004 we began looking at the brewer Heineken and on the surface the situation seemed relatively simple”, Paul explains. Heineken was selling at a 10 times price to earnings ratio (P/E) and it was one of the great global brands. In contrast, Anheuser-Busch, the dominant beer company in the US, had a long history of selling at 20-plus P/Es. You could see why – it had a history of growing earnings and a growing market share and that was different to Heineken. Coca-Cola, another global beverage brand, was also at 20 times earnings.

“Our observation from this was that investors will value a beverage company at 20 times earnings if they believe it's well run and growing its earnings. Heineken was growing its volumes around the world. There was also a generic trend of moving from domestic beers to global beers. Heineken was in a good position to take advantage of globalisation and people moving to accept global beer brands in their domestic markets. This was good for Heineken but trouble for Anheuser-Busch, but Anheuser-Busch was trading at double the valuations to Heineken and it should have been the other way around. It’s your classic anomaly. But you need to be able to recognise that, and we were helped there by my history analysing US companies and seeing what they trade at in good times.”

“We research stocks individually depending on their industry and place in the market. Often you think you've seen an anomaly, and then when you do the work you realise that there’s reasons and it’s actually fairly valued given those reasons. When you've been doing this for 30 years you can look out there and see that something looks relatively cheap or expensive.

“In Heineken’s case we found there was a reason: historical use of capital. These brewers were using expensive acquisitions to try and grow in an environment where it was difficult to grow organically because they didn’t have price control - a lose-lose situation. So they didn't have the earnings growth and then when they made acquisitions they overpaid.

“However, we thought an inflection point was coming. All of a sudden I noticed that if I'd go down to the local pub I'm seeing Heineken and Stella [Artois], and people – not me! – were paying a 50% premium for them. Although if you did the taste test, well, they're all the same, these lagers. But what clicked to me was that if these companies are now able to increase their volumes at a 50% premium price, then profit margin's going up, earnings are going up. But they were being priced for no growth, and that was the opportunity.

“We analysed everything we could find on the industry and the CEOs were basically saying that they weren’t going to make any more earnings dilutive acquisitions or concentrate on price-led market share battles.

“We did field research. We talked to the chief financial officer of Interbrew on Christmas Eve. We travelled to Europe - Czechoslovakia, Hungary. This was when Eastern Europe was only just starting to open up. We met with management at the local breweries.  We wanted to see the structure of the market. If someone bought a company, could they consolidate it? Could they make a better market? Could they make it grow? And we basically saw how consolidation around the world was in the early stages of evolving.

“The other point was that Brazilian company AmBev, wanted to diversify out of its country because it was so dominant there. We felt AmBev would start acquiring and consolidating and running breweries better;  bringing in capital discipline. So there were a number of inflection points coming together and we felt, as Heineken was trading at 10 x earnings and it has a great brand, there wasn’t any downside. It was a very, very simple idea and a pretty simple business plan for a tried and true industry – beer.  So it was a perfect combination for us.

We first invested in Heineken in June 2005 and have held it since then. We watch the market closely to see when our investment thesis has totally played out and it is the right time to adjust our holding or sell.

“At the same time there were other opportunities as the industry consolidated. The obvious acquisitions were those brewers that had fragmented shares across the globe because Heineken or an Interbrew could come in and just consolidate and create a duopoly beer structure.

What does Heineken show about PM Capital’s approach to investment?

“Success is a combination of understanding different types of businesses, understanding the dynamics that create the situation that makes these businesses mispriced,” Paul says. “The more experience you have, the better position you're in to judge. And then it comes down to once you've spotted an idea, then you’ve got to break it down into its really simple components. Do the background work to put yourself in a position to back your conviction with a proper allocation of capital because good opportunities are genuinely hard to find. So if you find them, you want to make the most of them.

“What started as a small interest in a South American brewing company, AmBev, that appeared to be severely mispriced, became an important element in our portfolio over more than a decade. Holdings have included AmBev, Carlsberg, Scottish & Newcastle, SAB Miller, Anheuser Busch, Molson, FEMSA, Grupo Modelo, Kirin, Asahi and HiteJinro.  We found a good opportunity and we have made the most of it.”