Bigger is better? A simple investment tool for a simple message

Paul Moore says investors can 'fall in love' with particular stocks, ignoring individual stock valuations and following the herd into the most expensive of them.

This has been exacerbated in the past decade by the growing trend of ‘process’ investing – the rise of index funds and ‘closet’ indexers – fund managers who all but hug the weights of stocks in particular indices.

Other stocks, on more reasonable valuations, are ignored because they do not have a large weighting in the index, are not the flavour of the month and do not get the coverage that the ‘new giants’ tend to get in the media and broker sell-side research.

A simple investment tool shows that the top 10 stocks globally are unlikely to remain in that group over the long term. The following table goes some way to showing that it is never ‘different this time’; that the market continues to have sizeable trend shifts which affect who are the top-valued players: 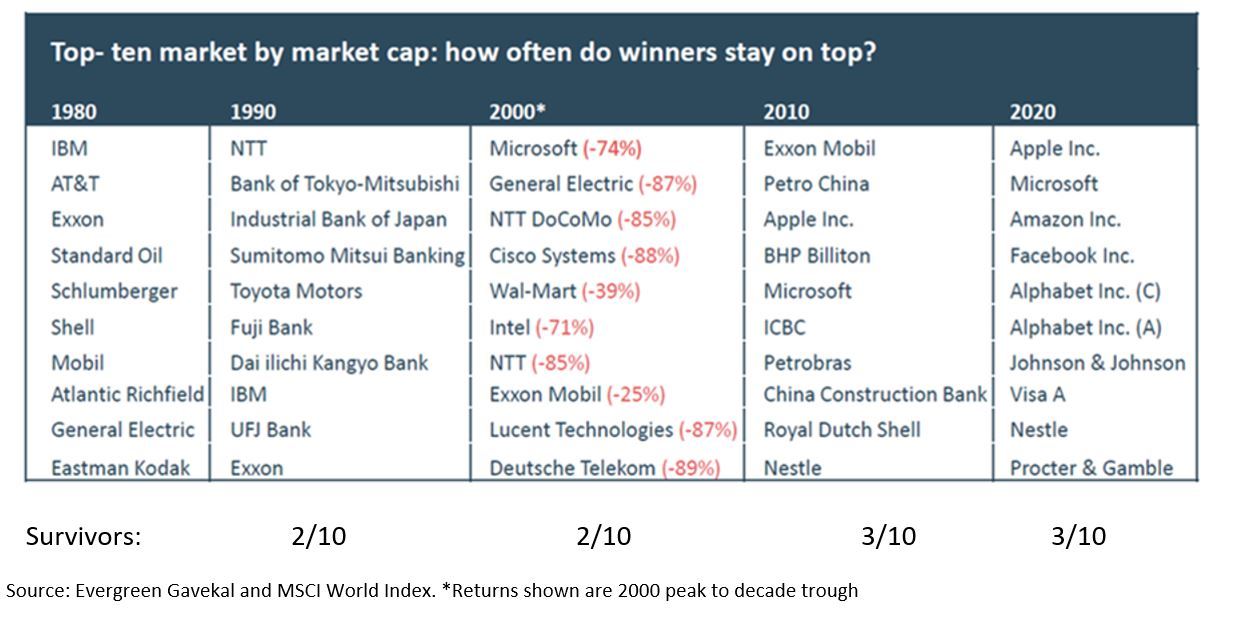 The table outlines the top 10 stocks by market capitalisation in the MSCI World Index at the beginning of the decade in 1980 through to 2020. It points out that it is rare for a stock to be in the top 10 at the start of one decade and to still be there at the start of the next decade ten years later. For example, in 1990 there were two survivors from the 1980 list, and in 2010 there were three survivors from the 2000 list. Since 1980 there have been no more than 30% ‘survivor’ stocks.

So what does this mean? Investors become most convinced of a stock’s premium valuation at their inflection point and concentrate their assets there. The danger of investing in those stocks most owned is now even higher because of the extraordinary weight of money driven by process investing inherent in index and quasi-index funds. In fact, by doing so (notwithstanding the strong swing towards momentum stocks in the past five years as interest rates have dived) an investor is more likely to pick the top for those stocks than get in at the bottom or at reasonable valuations. Check the intra-decade losses of the top stocks of 2000… (in red). People forget just how far the darlings of early 2000 fell.

The simple message is that smart investors may want to consider how exposed they (and their managed funds) are to the top 10 stocks. They would do well to consider what will benefit up to 2030 and be in the next top 10, rather than concentrating their investments in what have been successful over the past decade and have, based on the historical average, between 20-30% chance of being one of the 10 biggest stocks in a decade’s time.

So who will be the survivors in 2030 from the 2020 list? More importantly, investors may want to think very carefully about who will be the new entrants that will grow at a far more rapid rate than the market average.

We believe that March was the bottom in the markets, with “peak fear” crossing over with a “peak response” from government authorities. This, I believe, created another one of those very rare investment opportunities, which tend to come around every 10 years. For example, we had the 1987 crash which left companies like Coca-Cola selling on a quite extraordinary price to earnings ratio (P/E) of 10. We had the TMT period around 1999, where the old economy was selling on single digit PEs. Then in 2009 we had the post-GFC environment, which produced, as I said at the time, a once in a lifetime opportunity in credit, and a once in a generation opportunity in equities.

And so we come to the COVID-19 period. Now, we are again at what I believe to be a major secular shift in the performance of different types of businesses in the market and which ones will generate an appropriate return for investors over the next decade. I believe there was a once in a lifetime opportunity in those quality cyclical and industrial sectors of the market that were most impacted by the shutdown of many parts of the economy.

For example, commodity stocks post COVID-19 were at an all-time low compared to the rest of the market. Stocks like Teck Resources and Freeport-McMoRan have gained significant ground since the March lows but their valuations remain reasonable when considered against their long term outlooks.

We believe that stocks such as these will benefit markedly as the COVID-19 environment recedes. The elements are there for a significant increase in aggregate demand, while supply can grow, but more slowly. The stocks that will thrive this decade are ones that can take advantage of secular trend shifts (like the use of copper in global electrification) as well as a cyclical economic recovery. While they are unlikely to all end up in the top 10 of the MSCI World Index, we believe they will grow at a greater rate than the overall market and provide adequate investment returns. 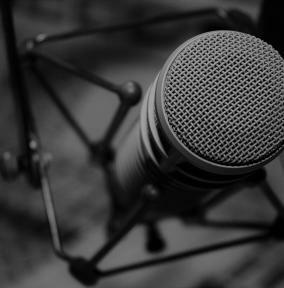 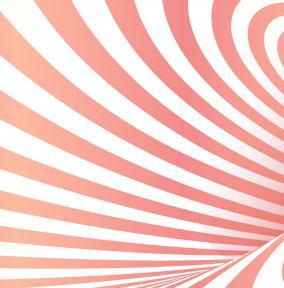 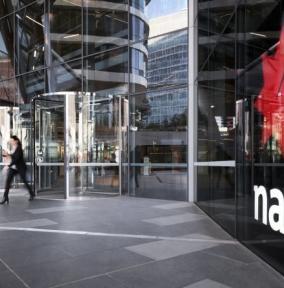